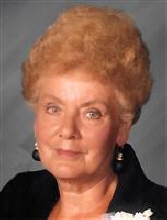 Alvira Tentinger, 94, of Remsen died Saturday, February 8, 2014, at her home in Remsen, Iowa surrounded by her family.

Services will be 10:30 a.m. Wednesday at St. Mary's Catholic Church in Remsen, with the Rev. Kevin Richter officiating and Deacon Rick Roder concelebrating.  Burial will be in St. Mary's Cemetery. Visitation will be after 4 p.m. Tuesday, with a parish rosary at 5 p.m. a vigil prayer service at 7 p.m. all at the Fisch Funeral Home in Remsen.

Alvira was born April 19 1919, at rural Remsen, the daughter of William and Mary (Weiler) Miller. She was raised in Remsen and received her education at St. Mary’s Catholic School.  Alvira then worked at home on the farm.

She was a member of St. Mary's Catholic Church, church guild and past member of the Catholic Daughters of America.