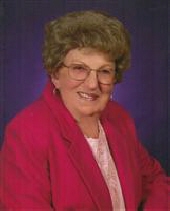 Betty Therese Nilles, 83of Remsen, Iowa, passed away on June 18, 2011 at the Happy Siesta Care Center in Remsen.
Funeral services will be at 10:30 a.m., Thursday, June 23, 2011, at St. Mary’s Catholic Church in Remsen, with Father Bill McCarthy and Deacon Rick Roder officiating. Interment will follow at St. Mary’s cemetery in Remsen.  Visitation will be anytime after 4 p.m. with the family present, Wednesday afternoon, June 22,  There will be a parish rosary at 5 p.m. and a vigil prayer service at 7 p.m.. all at Fisch Funeral Home & Monument in Remsen.
Betty was born on October 6, 1927 on the family farm south of Remsen, the daughter of Peter J. and Olga (Krieps) Nilles.  She attended and graduated in 1945 from St. Mary’s High School.  She worked as a housekeeper for several years prior to attending and graduating in 1961 from Ellis Beauty School in Sioux City.  She opened Betty’s Beauty Bar in Marcus.  Later she also ran the Laundromat and had plants and flowers in conjunction with Hubie’s Flower Shop of Remsen.  After closing her salon, she moved to Remsen continuing working with Hubie Nothem and later with Kevin Lammers, owner of Flowers n’ Things.  She graduated from Floral and Design School in St. Joseph, Missouri.  She worked at Flowers n’ Things until her health began to decline.  She became a resident of the Happy Siesta Care Center in the fall of 2010.
Betty was an avid gardener.  She enjoyed painting ceramics and making embroidery projects and other crafts.  She was an excellent knitter, making coats, dresses and sweaters for herself and others.  Betty and her sister Marcella Hansen spent several years working on the genealogy of the Nilles Family Tree as well as the Krieps family.  Betty, Marcella and Marcellas’s son, Ken Hansen, made a trip to Luxembourg to see the country of their ancestors and do research there.  She also traveled to many other places such as Hawaii, the Camen Islands, Jamaica and the Bahamas.
She was a member of the Luxembourg Heritage Society of Northwest Iowa, The Legion Auxilliary VFW, St. Mary’s Church and St. Mary’s Guild.  She also was a member of the Northwest Iowa Genealogical Society during the years she did research.
She is survived by a son, Larry Nilles of Redmond, Oregon, two grandchildren, Jennifer Nilles of Redmond, Oregon, and Brandon Nilles of California, one sister, Clarice Bainbridge of Kingsley, six brothers, Dennis and wife Beverly, Peter and wife Judy, Mark and wife Jean, all of Le Mars, Stanley and wife Shirley of Kingsley, Tony and wife Julie of Lake Park, and Lorne and wife Florence of Remsen.  There are many nieces and nephews that survive her.
She was preceded in death by her parents, Peter J. and Olga (Krieps) Nilles, one brother, George and his wife Phyllis, two sisters, Marcella Hansen and husband Norbert and Ruth Grage and husband Jerry, one sister-in-law Lynette Ames Nilles, one nephew and one great nephew.
Casketbearers will be her god children, John Nilles, Chris Nilles, Deb Nilles Schroeder, Patty Nilles Dau, Peggy Hansen Florke and Jacquie Grage Lonsdale.
To order memorial trees or send flowers to the family in memory of Betty Therese Nilles, please visit our flower store.