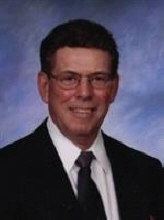 Mass of Christian Burial will be Thursday, Feb. 11, 2016 at 10:30 a.m. at St. Mary’s Catholic Church in Remsen, IA with Rev. William McCarthy officiating and Deacon Rick Roder assisting.  Burial will be in St. Mary’s Cemetery in Remsen, IA.  Graveside military honors will be conducted by VFW Post 3328 and American Legion Post 220 of Remsen.  Visitation will be any time after 4 p.m. Wednesday, Feb. 10, 2016.  There will be a parish rosary at 5 p.m. and a vigil prayer service at 8 p.m. all at Fisch Funeral Home & Monument in Remsen.  Services have been entrusted to the Fisch Funeral Home & Monument of Remsen.


Dale was born Sept. 16, 1941, at Alton, IA the son of George and Josephine (Arens) Homan.  He was raised on a farm in the Alton area and graduated from St. Mary’s Academy in Alton in 1959.  He then served in the U.S. Army.  He returned home and went into construction.


He married Sharon Tentinger June 15, 1968 at Remsen.  The couple made their home in Remsen.  He was in the construction business until his death.

Dale was a member of St. Mary’s Catholic Church.