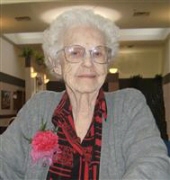 Eva Lorraine “Sis” Brandes, 94 years old, of Remsen, IA, died Friday, May 20, 2011, at Happy Siesta Health Care Center in Remsen.
Funeral service will be at 10 a.m., Monday, May 23, 2011, at St. Mary’s Catholic Church in Remsen with Rev. William McCarthy officiating.  Burial will be in the St. Mary’s Catholic Cemetery in Remsen.  Friends may call anytime after 2 p.m. on Sunday, May 22, 2011.  There will be a parish rosary at 3 p.m. and a vigil prayer service at 7 p.m. all at the Fisch Funeral Home & Monument in Remsen, IA.
She was born on May 23, 1916 in Remsen, Iowa.  She was the second  child and the only daughter of Paul & Veronica “Vera” (Brune) Schmidt.  She lived her entire life in Remsen, Iowa and was a well-known member of the community.  Many children in Remsen were treated to the assortment of candies she always kept in her pockets.  One of her favorite sayings was, “I am just nuts about kids!”  The kids knew it and loved every minute they spent in her presence.
She attended both Remsen St. Mary’s and Remsen High School and graduated from the latter in 1933.  She met her future husband, Henry Brandes, at the corner popcorn stand in the middle of town during the summer of 1936.  They spent that summer enjoying picnics in the park, traveling to concerts by Lawrence Welk in Oyens, and assisting the community as it recovered from the famous Remsen Fire of 1936.
Sis and Henry were married on February 21, 1939.  When Henry was drafted in 1944, Sis and her young daughter, Barbara, moved to New Jersey for a brief time to be with Henry’s family.  They moved into their permanent home at the north end of Washington Street in 1953 where they raised their two daughters.   Henry was disabled by a massive stroke in 1973 and Sis served as his daily caretaker until his death in 1992.
Sis has been a resident of the Happy Siesta since Deember 1, 1998.  She entered the community there as an active participant in all the activities.  She loved bowling, bingo, and the dining outings most of all.  Her sense of humor made her a favorite with residents and staff alike.
She is preceded in death by her parents, her husband Henry, and two brothers (Omar and Bob Schmidt).  She is survived by her two daughters Barb Holles and Paula Brandes (both of San Diego, California),  brother Fred and his wife Cleone of Spirit Lake, Iowa and brother Ronald Schmidt and his wife Jean of Bloomington, Minnesota.  Her grandson Paul Holles and his wife Maria are from Conyers, Georgia.  Granddaughter Amy Holles and her spouse Kelly Jones are from London, Ontario Canada.  She also is survived by numerous nieces and nephews and many friends, both young and old.
Casket Bearers, Paul & Amy, Gerald Holles, Dennis Gralapp, Timothy Russell, Fred Schmidt Jr., Adam Schmidt, David Wingert.
To celebrate the legacy of Sis Brandes, the family has requested that any donations in her honor be given to the Happy Siesta Dreams Program.
To order memorial trees or send flowers to the family in memory of Eva Lorraine "Sis" Brandes, please visit our flower store.