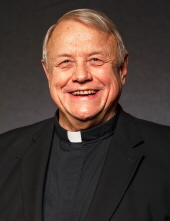 The Rev. John A. Vakulskas Jr., 76, of Sioux City, IA, died Sunday, Sept. 27, 2020, at Mercy One Siouxland Medical Center, following a seven-month battle with pancreatic cancer, which was accelerated by the coronavirus.

A Mass of Christian burial will be held on Saturday, October 10, 2020 at 11:00 a.m. at Mater Dei Parish, Church of the Nativity of Our Lord Jesus Christ, in Sioux City, IA, with Bishop R. Walker Nickless officiating. Principal concelebrants will be Rev. Dan Rupp, Msgr. Kevin McCoy, Rev. Brad Pelzel, Rev. Terry Roder and Rev. Matthew Solyntjes, with other priests of the Diocese of Sioux City concelebrating. Private burial will be in Calvary Cemetery in Sioux City at a later date.  Visitation will be at Nativity church from 9:30 a.m. until service time.  Masks are required and social distancing restrictions will be followed in the church.  The funeral can be watched live online at www.materdeisc.org.  Services have been entrusted to Fisch Funeral Home & Monument of Remsen, IA.

John studied one year at Crosier College Seminary, Onamia, Minn., then transferred to Loras College, Dubuque, Iowa. He earned a Bachelor of Arts degree in 1965 from Loras, majoring in philosophy, English literature, and creative writing. In 1969, John was awarded a Master of Arts degree in theology from Mount St. Bernard Seminary (Aquinas Institute of Theology), in Dubuque.

Bishop Joseph M. Mueller ordained him a priest for the Diocese of Sioux City on May 24, 1969, at Cathedral of the Epiphany.

In the fall of 1992, Father Vakulskas studied at the Institute for Continuing Theological Education, North American College, Vatican City, Rome, Italy. He served as youth director for the diocese, 1980-87 and executive secretary of Priests' Provident Society (serving sick, disabled, and retired priests), 1984-1992.

On July 4, 1969, Father Vakulskas began his ministry to carnival workers, when he was called by Jennie Klein to the Plymouth County Fairgrounds in Le Mars to minister to her husband Henry Klein, owner of the carnival that was in town. The Kleins suggested the priest take on the special ministry to those individuals in an industry that was constantly on the move, but in need of the sacraments.

Pope St. John Paul II appointed him International Coordinator of Carnival Ministries in December 1993 and the United States Catholic Conference approved a similar national appointment in the spring 1994. Father Vakulskas was the only member of the U.S. clergy with a permanent ministry to carnival workers. In 2012, he was recognized for his service to carnival workers by Pope Benedict during a Mass celebrating the Year of Faith at the Vatican. Pope Francis honored Father Vakulskas in 2016 for his ministry to migrants and itinerant people at a Vatican Mass celebrating the carnival industry.

Father Vakulskas was named Knight of the Year by the State of Iowa Knights of Columbus in 1977 and 1989. Several times he served as Chaplain of the Day at Iowa Senate and House of Representatives, as well as chaplain for the Iowa State Patrol. Father Vakulskas was a licensed, instrument-rated airline pilot and an amateur Radio Operator since 1962 (NOVKX). His hobbies included sailing, snow skiing, water skiing, and cheering the Chicago Cubs.

In February, doctors diagnosed advanced stage metastasized pancreatic cancer, and Father Vakulskas began chemotherapy in Florida. In March, he moved to Sioux City and lived with his sister, Janet, while continuing chemotherapy. He was recently hospitalized with conditions associated to the cancer and chemotherapy, when he contracted the coronavirus.

He was preceded in death by his parents and a brother-in-law, Phil Masteller.

Memorials may be directed to the Carmelite Nuns of Sioux City; Trinity Heights of Sioux City; Catholic Charities Diocese of Sioux City.
To order memorial trees or send flowers to the family in memory of Fr. John A. Vakulskas Jr., please visit our flower store.

Church of The Nativity

Visitation will be at Nativity church from 9:30 a.m. until service time. Masks are required and social distancing restrictions will be followed in the church. The funeral can be watched live online at www.materdeisc.org.