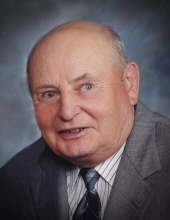 In lieu of flowers, the family asks that donations be made to St. Mary's Church or St. Mary's Schools in Remsen.

Services will be 10:30 a.m. Thursday, April 12, 2018 at St. Mary's Catholic Church in Remsen, with the Rev. William McCarthy officiating. Burial will be in St. Mary's Catholic Cemetery. Visitation with the family present will be 4 to 6 p.m. Wednesday, with a vigil prayer service, K of C rosary and 4th Degree Knights of Columbus chalice presentation all at 5 p.m., at Fisch Funeral Home & Monument in Remsen.

He was born April 26, 1924, the son of Joseph and Clara (Hansen) Schroeder. He was born and raised on a century farm south of Remsen and attended both country school and St. Mary’s Catholic School. He was then a farm laborer in the Remsen area. He entered the U.S. Army on Aug. 19, 1944 and served over seas in the Philippines, Nagasaki and Hiroshima Japan. He was discharged October 26, 1946. He then returned back to being a farm laborer in the Remsen area.

On Oct. 21, 1947, he married Norma Staab at St. Mary's Catholic Church in Remsen. The couple made their home near Granville, Iowa, where they farmed. In 1957, they moved to a farm near Remsen, where they started dairy farming with Irvin's brother, Silverius. They moved into Remsen in 1974, but continued to farm until retiring in 1987. The couple moved to Bavarian Meadows Assisted Living on June 2, 2009. Norma passed away on Sept. 24, 2017.

Irvin was a member of St. Mary’s Catholic Church in Remsen. He was a 4th Degree Knights of Columbus and held office in the organization. He was a member of the Luxembourg Brotherhood, V.F.W. Post 3328, and a past member of the Plymouth- Woodbury Dairy Herd Improvement Assoc., which he held the position of President for 14 of those years. He was an avid pencil collector and was a member of the American Pencil Collectors Society. He also enjoyed playing cards, especially pinochle and socializing with people.

Pallbearers will be Roger and Jerry Braun, Anthony and Steve Staab, Joe Schroeder and Allan Rupp.
To order memorial trees or send flowers to the family in memory of Irvin D. Schroeder, please visit our flower store.

Visitation with the family present will be 4 to 6 p.m. Wednesday, with a vigil prayer service, K of C rosary and 4th Degree Knights of Columbus chalice presentation all at 5 p.m., at Fisch Funeral Home &amp;amp; Monument in Remsen.