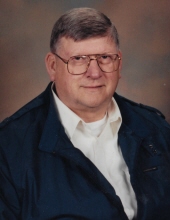 Memorial mass will be at 10:30 a.m., Monday, Aug. 22, 2016, at St. Mary’s Catholic Church in Alton with Rev. Terry Roder officiating. Interment will be in the St. Mary’s Cemetery in Alton. Graveside military honors will be conducted by American Legion Floyd Post 200 of Alton. Friends and family members are invited to a visitation at the church in Alton from 4-7 p.m. on Sunday, Aug 21, 2016 with a parish rosary at 5 p.m. and a vigil prayer service at 7 p.m. Services have been entrusted to Fisch Funeral Home & Monument of Remsen. Condolences may be sent online to www.fischfh.com.

Jack was born to Carl and Genevieve (McGuire) Harriman on Aug. 30, 1940, at Kanawha, IA, as the youngest of three children. At a young age he moved with his family to Alton. He spent his childhood getting to know the community by working at his father’s businesses – a butcher shop, the movie theater and the drive-in restaurant. He graduated from St. Mary’s Academy in 1958 where he was active in baseball and basketball. He entered the U.S. Army and served in Germany until he was honorably discharged in 1961. After his time in the service, Jack attended business school in Sioux City. He worked at several jobs over the years in Minneapolis, Carroll, IA, LeMars, IA then moved back to Alton where he took over his parent’s business, the Alton Drive Inn, for 4 years. He became a salesman for Maintainer then Feterl Manufacturing selling trucks in Salem, SD where he lived for 25 years then in Heron, SD for 3 years. After many years away, Jack was happy to move back to his hometown of Alton earlier this year in April. Jack was a born salesman and never met a person that didn’t become a friend in all his years of sales and traveling. In his younger years, Jack enjoyed golf, cards, socializing with friends, and spending time with his nieces and nephews to whom he was a kind and generous uncle.

Jack was preceded in death by his parents, his step-father, Clarence Mousel, his brother Jim Harriman, his sister Mary Gitchell, one step-brother, and in 1964 by his fiancé, Marilyn Mae Konz.
To order memorial trees or send flowers to the family in memory of Jack Carl Harriman, please visit our flower store.