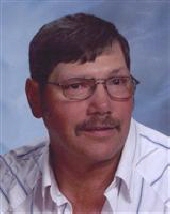 James “Jim” B. Niehus,  59 years old, of Remsen, IA, died Thursday, Sept. 10, 2009, at Mercy Medical Center in Sioux City, IA.
Funeral service will be at 10:30 a.m., Monday, Sept. 14, 2009, at St. Mary Catholic Church in Remsen with Rev. William McCarthy officiating.  Burial will be in the St. Mary Catholic Cemetery in Remsen. Grave side military honors will be conducted by V.F.W. Post 3328, and American Legion Post 220 of Remsen.  Friends may call anytime after 2 p.m. on Sunday, Sept. 13, 2009.  There will be a parish rosary at 3 p.m. and a vigil prayer service at 7 p.m. all at the Fisch Funeral Home & Monument in Remsen, IA.
Jim was born Nov. 6, 1949, at LeMars, IA, the son of LeRoy & Marcella (Reichling) Niehus.  He was raised in the Remsen area and received his education at both St. Mary Catholic School and Remsen-Union Community School, graduating from Remsen Union in 1967. On Nov. 22, 1968, he entered the U. S. Navy, serving during the Vietnam War and was honorably discharged on July 1, 1972 .
On May 11, 1973, he married Debra Francois at St. Mary Catholic Church in Remsen.  Jim worked as a farm laborer in several communities around the Remsen area.  The couple made their home in Remsen in 1984, where he farmed with his father and brother.  Jim was very proud of his military service and was active with the VFW Color Guard.  He also enjoyed woodworking, fishing and his family.
Jim was a member of St. Mary Catholic Church in Remsen, V.F.W Post 3328 and American Legion Post 220 of Remsen.
Survivors include; His wife Deb of Remsen; Daughter, Beth & her husband Corey Gergen of Granville, IA; Son Mike & his wife Jen Niehus of Peyton, CO; Daughter Lori & her husband Jeff Spenner of Sioux City, IA; His Mother Marcella Niehus of Remsen; 9 Grandchildren; Sister Kathy & her husband Wayne Vandel of Kasson, MN; Sister Pat & her husband Glen Blinkmann of Mason City, IA; Brother Bob Niehus of Remsen; Brother-in-law, Dwayne Francois of Denison, IA; Numerous Nieces & Nephews.
Preceded by: His father LeRoy Niehus;  father & mother-in-law, Arnold & Dona Wendt;  brother-in-law, Don Francois.
To order memorial trees or send flowers to the family in memory of James "Jim" B. Niehus, please visit our flower store.