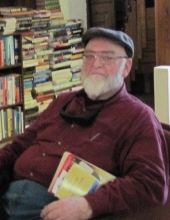 Memorial Mass will be at 11 a.m., Thursday, Oct. 20, 2016, at St. Mary's Catholic church in Remsen with Rev. William McCarthy officiating. Burial will be at a later date at St. Lawrence cemetery, Otter Creek, IA. Visitation will be from 9 a.m. until service time Thursday at Fisch Funeral Home & Monument, Remsen. Services have been entrusted to Fisch Funeral Home & Monument of Remsen. Condolences may be sent online to www.fischfh.com.

Jim was born February 7, 1937, and grew up near Cascade, IA. He earned a B.A. in history from Loras College, Dubuque, IA, in 1963, and an M.A. in history from the University of Delaware, Wilmington, in 1965. He served as a military historian at the Smithsonian Institution, Washington, DC, from 1965-1975. While at the Smithsonian, Jim did the original research which located the wreck of the U.S.S. Tecumseh, sunk during the Battle of Mobile Bay. The battle is famous for Admiral Farragut's statement, "Damn the torpedoes! Full speed ahead!" Jim also served as an urban planner with Fairfax County, VA, from 1976-1977. He and his family then returned to Iowa, where he worked for several area trucking firms as an over-the-road truck driver until his retirement in 2008.

Jim and Judy Winterfeld were married in 1971 in LeMars, IA. In addition to his wife, he leaves a daughter, Amy (Gerard Schneider) and their children, Andrew, Julia, and Haiden of Brookfield, WI, and a son, Mark, of Portland, OR. Jim also leaves to mourn his passing three siblings: Michael (Diane) Stokesberry, Bettendorf, IA; Robert (Deb) Stokesberry, Tinley Park, IL; and Mary Anne (Jerry Heiderscheit), Onalaska, WI. Jim was preceded in death by his parents, John and Evelyn (Neese) Stokesberry, an older sister (at birth), and a brother and sister-in-law, Daniel and Lucille Stokesberry.

Jim was a character of true intellectual dimension, whose observations and discussions will be missed by those fortunate enough to know him. He was a consummate historian who never tired of studying events and the personalities who shaped them to find meaning and lessons for life today. His interests ranged from education to social science to politics, but his family was his life. His home through the years included not just his wife and children, but a dog or two of every size from Scottish Terrier to St. Bernard. He is too soon gone, and will be greatly missed.
To order memorial trees or send flowers to the family in memory of James Joseph Stokesberry, please visit our flower store.