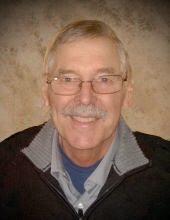 James P. Tentinger, 66 of Remsen passed away Sunday, Dec. 25, 2016 at Floyd Valley Hospital in LeMars, IA, after a 3 year courageous battle with cancer.

Memorial Mass will be 10:30 am Thursday, Dec. 29, 2016 at St. Mary’s Catholic Church in Remsen with Rev. William McCarthy officiating. Burial will follow in the St. Mary’s Cemetery in Remsen. Visitation with family present will be 4-7 p.m. on Wednesday, Dec. 28, 2016, there will be a parish rosary at 5p.m., immediately followed by a vigil prayer service all at Fisch Funeral Home & Monument in Remsen.

Jim was born December 14, 1950 in LeMars, IA, the son of Roman and Lucille (Henke) Tentinger. Jim was raised and educated in the Remsen area. Immediately following St. Mary’s high school graduation in 1969, Jim joined the Iowa Air National Guard in Sioux City.
On April 8, 1972 Jim married Sharon Pottebaum at Remsen. The couple made their home on the Tentinger Century farm Southwest of Remsen and took over his father’s dairy business which became Ten-Ayr Dairy.

Jim enjoyed spending time with his grandchildren by experiencing life on the farm, showing cows at the fair and working the land.

Preceded in death by his parents, Roman and Lucille, his in-law’s, Bernard and Esther Pottebaum.

In Lieu of flowers the family requests that donations be made to Hope Angels in Remsen
To order memorial trees or send flowers to the family in memory of James Peter Tentinger, please visit our flower store.