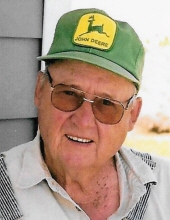 John was born August 9, 1929, to Louis and Agnes (De Vries) Vander Molen, and raised on farms in the Craig, Maurice and Struble areas. His Uncle Dan nicknamed him “Wimp” because, like Wimpy from “Popeye,” he loved burgers.

He served in the Korean War 1952-1953, 8th Army, 2nd Infantry Division “Second to None,” 131st Trans. Trk. Co. He instilled a strong sense of duty, service, and pride of country in his children and grandchildren.

He met Mary E. Schilmoeller at Archie's Waeside, and they were married a year later on January 31, 1955. They lived on farms in the Struble & Maurice areas before moving to a farm near Remsen in 1970. Together they raised seven children.

John drove truck for Phil Groetken and Sioux City Motor Express, and would recount his trucking days to anyone who'd listen. He hauled everything from ammunition in Korea to rodeo stock with Ozzie Arens.

John farmed most of his life, and ran “Wimp's Shelling Service” for a number of years. “You pick 'em, we peel 'em.” He enjoyed driving around in his Ford pick-up admiring crops and livestock in the area. He loved his sweet corn. Any raccoon or varmint that stepped foot on his land received swift justice.

John was an honest man, a good story-teller, and a great listener.

He was preceded in death by his wife Mary; two sons, Terry and Bradley; two brothers, Lloyd and Allen (who died in infancy); and a sister, Gertie.