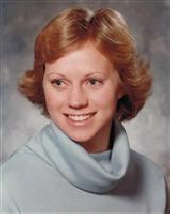 Funeral service will be at 10:30 a.m., Tuesday, June 25, 2013, at St. Mary’s Catholic Church in Remsen with Rev. William McCarthy and Deacon Rick Roder officiating.  Burial will be in the St. Mary’s Catholic Cemetery in Remsen.  Visitation will be anytime after 4 p.m. on Monday, June 24, 2013.  There will be a parish rosary at 5 p.m. and a vigil prayer service at 7:30 p.m. all at the Fisch Funeral Home & Monument in Remsen, IA.

Julie was born August 25, 1956, at New Ulm, MN, the daughter of Donald F. and Valeria (Doherty) Dummer.  Julie was baptized and confirmed at Sacred Heart Catholic Church in Franklin, MN.  She received her education at Franklin and was a 1974 graduate of Franklin High School where she was a cheerleader.  She also participated in 4-H, basketball, and FFA.  In the summers, she worked as a lifeguard in Fairfax.  She graduated in 1978 from St. Cloud State University with a degree in Physical Education.  While there, she was a cheerleader and a Resident Assistant.  After college, she moved to Sioux Falls where she worked at the YWCA.

On May 17, 1980 she married Mike Nelson in Franklin, MN.  The couple made their home in Remsen.  Two children were born to this union, Kristine in 1984, and Keith in 1988.  She held various jobs throughout the years.  Some of the positions she held were the Remsen pool manager and lifeguard, Remsen Apparel and also worked in the Alzheimer’s unit at the Happy Siesta Health Care Center in Remsen.  Julie was a member of St. Mary’s Catholic Church, church guild and was very active in the church and school.

Julie courageously struggled from the effects of Huntington’s Disease.  When she needed assistance with her daily care, Julie became a resident of Happy Siesta Health Care Center in Remsen in 2004.

She was preceded in death by, her mother, Val Dummer in 2011, father, Don Dummer in 2012; brother, Gary Dummer in 2012.
Lunch will follow the committal at Remsen City Hall Gymnasium.
To order memorial trees or send flowers to the family in memory of Julie Ann Nelson, please visit our flower store.