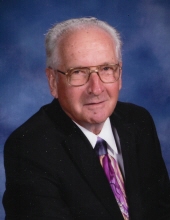 Funeral service will be at 10:30 a.m., Friday, Feb. 16, 2018 at St. Mary's Catholic Church in Remsen with Rev. William McCarthy officiating and Deacon Rick Roder assisting. Burial will be in St. Mary’s Catholic Cemetery in Remsen. Graveside military honors will be conducted by American Legion Post 220 and V.FW. Post 3328 of Remsen. Visitation with family present will be from 4-7 p.m. on Thursday, Feb. 15, 2018. There will be a parish rosary at 5 p.m. and vigil prayer service at 7 p.m. all at Fisch Funeral Home & Monument in Remsen.

He married Marietta (Groff) Arens on August 24, 1990.  The couple lived in rural Remsen until 1999 when they moved into town.

Kenneth was called to active Army duty on Dec. 3, 1955.  He served 2 years of active duty with Company B 13th Transportation Battalion, 2nd Infantry Division.  He was assigned to Ft. Richardson, Alaska where he attained the rank of PFC and received the Good Conduct Medal.  After his 2 years of service and serving his remaining obligation he was honorably discharged.

Kenneth was a member of St. Mary’s Catholic Church in Remsen, Catholic Order of Foresters and Knights of Columbus. He enjoyed riding his Harley, hanging out with coffee buddies at Ruth's Cafe and later at Mrs. B's, wintering in Arizona with Marietta.

Visitation with family present will be from 4-7 p.m. on Thursday, Feb. 15, 2018. There will be a parish rosary at 5 p.m. and vigil prayer service at 7 p.m. all at Fisch Funeral Home &amp;amp; Monument in Remsen.