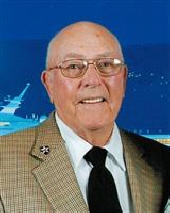 Leonard William Sonnichsen, 81, of Le Mars, Iowa, departed peacefully to his heavenly home on Saturday, February 16th, 2013 in Palm Desert, CA.
A Memorial Service will be held Monday, March 4, 2013 at 7p.m. at Christ Lutheran Church LCMS in Remsen, with pastor Dennis Martens officiating.  Visitation will be Sunday, March 3, 2013 from 5 to 7 p.m.  There will be a prayer service at 7 p.m. all at the church.  Visitation will resume one hour prior to service on Monday.  Burial will be at a later date in the Remsen Community Cemetery.
Leonard was born April 17th, 1931 in Le Mars, Iowa, to Hans and Anna (Kroeger) Sonnichsen.  He was baptized May 3, 1931.  He was raised in Remsen, Iowa along with his sister, Della Kluver.  He earned his private pilot license before graduating from Remsen High School in 1949.  Leonard attended trade school in Chicago until he enlisted in the Army in 1950.  He served a year in Korea with the 2nd Indian Head Division as a Radio Lineman, earning two battle stars.  Leonard was honorably discharged from the Army in 1953.
Leonard married Nancy Spaan Fraser on June 28th, 1957 at Methodist Church in Kingsley, Iowa.  They moved to his family farm by Remsen and raised four children; Douglas, Steven, David, and Janet.
Leonard was a lifelong member of Christ Lutheran Church in Remsen, where he held many positions on the council.  He also belonged to Christ Lutheran Church in Desert Hot Springs, CA.  Leonard was a life member of the VFW and was an avid supporter of many Veterans organizations.
Leonard was a loving honest family man, a remarkable dancer, passionate fisherman, and a BULL HEADED GERMAN!  He made several trips to Europe with his family to find his ancestors.
He is survived by his wife of 55 years, Nancy Sonnichsen, and their children, Douglas Sonnichsen of Mary Ester, FL, Steven & Carol Sonnichsen of Malvern, IA, David & Christine Sonnichsen of Remsen, IA, Janet & Robert Amundson of  Washington D.C.; grandchildren:  Rheanna Sonnichsen of Salt Lake City, UT, Christopher & Christina Sonnichsen of Beaumont, CA, Laurel & Anthony De Masi of Hesperia, CA, Emily & Michael George of Misawa Air Force Base, Japan, Alexandria Sonnichsen of Denver, CO, Colin Sonnichsen of Remsen, IA, Great-grandchildren: Noah and Cole Sonnichsen, Geno and Lucy De Masi;
Sister: Della Kluver of Remsen, IA; Many nieces, nephews and friends.
Preceded in death by his parents Hans and Anna Sonnichsen, grandson David Sonnichsen, and brother-in-law Herman Kluver.
In lieu of flowers send donations to Hospice of Sioux Land.
To order memorial trees or send flowers to the family in memory of Leonard William Sonnichsen, please visit our flower store.