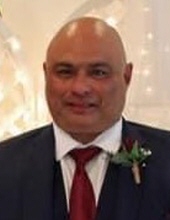 In lieu of flowers please direct memorials to the family for a cause to be determined at a later date, send to Kelsey Trejo, 40 Ridgeview Road, Sioux City, IA 51104.

Service will be 6 p.m. Friday, July 30, 2021 at Fisch Funeral Home & Monument in Remsen with Father Timothy Pick officiating.  Burial will be at a later date in Texas.  Visitation with family present will be 4-6 p.m. on Friday at the funeral home.  Services have been entrusted to Fisch Funeral Home & Monument in Remsen.  Service will be livestreamed at www.fischfh.com.

Marcos was born Feb. 26, 1966 in Austin, TX the son of Marcos Sr. & Olga (Paredes) Trejo.  He is the oldest of 5 boys, and enjoyed playing multiple sports throughout his childhood.  His true love was football.  He graduated from from McCallum High School in Austin, TX in 1984.

After meeting the mother of his children, Marcos moved to Remsen, IA where he lived until his death to raise and spend time with his children.  While in Iowa, Marcos graduated with an associates degree from Western Iowa Technical College.  He proudly worked over 20 years in the industrial industry.  Marcos was a active father, chasing his kids around during various family vacations, sports and school events.  He was always one to make a friend, greeting you with a handshake and a “Hey, how you doin’ man?” and his goofy laugh.

Marcos reunited with his true love, football, in the early 2000s coaching the Remsen St. Mary's 2004 football team to a state victory. This accomplishment was one you would often hear him brag about. Undeniably, his greatest accomplishment was in his children. He was often heard expressing his pride and love for his kids, and rarely turned down an opportunity to let them know.

Marcos was preceded in death by his wife Michelle Trejo, maternal grandparents Celestino and Felipa Paredes, paternal grandparents Natividad and Juana Trejo, and his uncle Daniel Paredes.
To order memorial trees or send flowers to the family in memory of Marcos Trejo Jr., please visit our flower store.