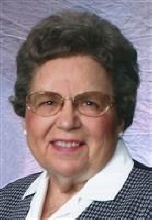 Phyllis Mary (Kessenich) Schroeder was born on May 6, 1935, on a farm near Neptune, IA, to John “Jack” and Mary “Mae” (Plendl) Kessenich.  She was baptized, made her First Communion, Confirmed, and was married at St. Joseph Catholic Church in Neptune.  Phyllis graduated from Union Consolidated School where she met her future husband.  She was united in marriage to Lyle Schroeder on January 8, 1958. They made their home on a farm south of Granville until 2010, then moved into Remsen.

She was a member of St. Joseph Catholic Church in Granville, Catholic Daughters of America, and St. Joseph Ladies Guild.  She enjoyed singing in the choir, listening to music, playing cards, gardening, and especially spending time with her family.

Phyllis received her Gift of Life (kidney transplant) on June 14, 1980.  Her family and friends have been blessed with this gift of life for 35 ½ years.

Honorary bearers will be her grandchildren.

In lieu of flowers donations can be made to St. Joseph Catholic Church of Granville, St. Mary’s Catholic Church of Remsen or the National Kidney Foundation.
To order memorial trees or send flowers to the family in memory of Phyllis M Schroeder, please visit our flower store.