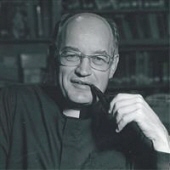 Rev. William J. Ortmann, 77 years old, of San Diego, CA & formerly of Remsen, IA, died Wednesday, Jan. 27, 2010, at Holy Spirit Retirement Home in Sioux City, IA.
Funeral service will be at 10:30 a.m., Monday, Feb. 1, 2010, at St. Mary Catholic Church in Remsen with Rev. Richard Sitzmann, Rev. William McCarthy & Rev. John Apel S.J. officiating.  Burial will be in St. Mary Catholic Cemetery in Remsen.  Visitation will be anytime after 2 p.m. on Sunday, Jan. 31, 2010.  There will be a parish rosary at 3 p.m., a vigil prayer service at 7 p.m., followed by a Knights of Columbus Rosary all at the Fisch Funeral Home & Monument in Remsen.  Visitation will resume from 9 a.m. until service time at St. Mary’s Catholic Church in Remsen.
Fr. Bill was born March 12, 1932, at Sacred Heart Hospital in LeMars, IA, the son of Henry & Regina Ortmann.  Fr. Bill was raised in Remsen, and graduated from St. Mary’s Catholic High School in 1949.  He then attended Loras College in Dubuque, IA graduating in 1953 with a Bachelor of Arts degree.  From 1953 until 1957 he attended Mt. St. Bernard Provincial Seminary in Dubuque.  He was ordained on June 1, 1957 at the Cathedral of The Epiphany by Bishop Joseph M. Mueller.  From 1957 until 1960 he was the associate pastor at St. Bernard in Breda, IA. From 1960 until 1964 he was the associate pastor at Immaculate Conception in Sioux City, IA.  From 1964 until 1968 he was pastor of Sacred Heart in Laurens, IA.  From 1968 until 1970 he was the associate pastor of St. Charles at Imperial Beach, CA.  From 1970 until 1974 he was the associate pastor of St. Joseph Cathedral at San Diego, CA.  In 1975 he graduated from San Diego State University with a Masters of Science in Education.  From 1974 until 1977 he was the Clergy Personnel Director for the Diocese of San Diego.  1977 until 1983 he was the associate pastor of St. Vincent De Paul at San Diego.  1983 until 1988 he was the pastor of St. Mary’s at National City, CA.  1988 until 1990 he was parish liason for Catholic Charities in San Diego.  1990 until present he was director for the Office For Marriage & Family Life.  Fr. Bill Retired on July 1, 1999 but continued his direction for marriages and family life through his ongoing services in the ministries of marriage Encounter, Engaged Encounter and Retrovaille.
Fr. Bill was a member of Knights of Columbus.
Survivors include: One sister, Jeanette Koch & her husband Melvin; His brother, Donald Ortmann & his wife Sandy all of Remsen, IA; His brother, Dr. Louis Ortmann & his wife Betsy of Festus, MO;  One sister-in-law, Eileen Ortmann of LeMars, IA; 27 nieces & nephews and many family & friends which include his community family & friends of 41 years in the San Diego and surrounding California areas.
Preceded by: His parents, One brother Joseph, Uncle Walt, His Niece & Godchild Julie (Ortmann) Bruggeman.
Casket Bearers will be, David Koch, Ann, Bill, Greg, Henry & Mike Ortmann.
To order memorial trees or send flowers to the family in memory of Rev. William J. Ortmann, please visit our flower store.