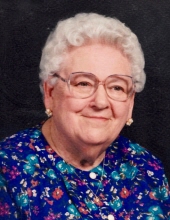 Memorial mass will be 2 p.m. Thursday, June 20, 2019 at St. Mary's Catholic Church in Alton, with Father Daniel Greving officiating. Burial will follow in the St. Mary's Cemetery in Alton. Visitation with family present will be one hour prior to the service on Thursday. There will be a rosary at 1:45 p.m. Services have been entrusted to Fisch Funeral Home and Monument in Remsen, Iowa.

Ruth was born Oct. 31, 1916, in Alton, Iowa, the daughter of Sebastian and Jennie (Mulder) Kuyper. She was raised and educated in Alton graduating from Alton Public High School in 1933. She worked in two restaurants in Alton and did domestic work in Alton prior to marriage.

On March 17, 1943 she married Peter Minten in South Sioux City, NE. They lived near Remsen for one year and then moved into Alton where they owned and operated a Bowling Alley and Cafe. They retired in 1969. Peter died December 24, 1977.  Ruth spent the last 8 years at Prairie Ridge Care Center in Orange, City.
She was a member of St. Mary's Catholic Church and was a member of Catholic Daughter guild and St. Mary’s Rosary Society.

Visitation with family present will be one hour prior to the service on Thursday. There will be a rosary at 1:45 p.m.