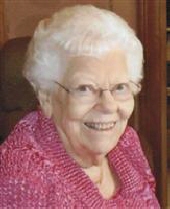 Sally Nitzschke, 89 years old, of Remsen, IA, passed away June 5, 2013 at Happy Siesta Health Care Center in Remsen, IA.
Funeral service will be at 9:30 a.m., Saturday, June 8, 2013, at St. Mary’s Catholic Church in Remsen with Rev. William McCarthy and Deacon Rick Roder officiating.  Burial will be in the St. Mary’s Catholic Cemetery in Remsen.  Visitation will be anytime after 4 p.m. on Friday, June 7, 2013.  There will be a parish rosary at 5 p.m. and a vigil prayer service at 7:30 p.m. all at the Fisch Funeral Home & Monument in Remsen, IA.
Sally was born July 10, 1923, at Remsen, IA, the daughter of John and Josephine (Bohlke) Vaske.  Sally was raised in Remsen and received her education at St. Mary’s Catholic School, graduating in 1941.  She then worked at Farmers Savings Bank in Remsen and was also a telephone operator for West Iowa Telephone in Remsen.
On May 12, 1951 she married Richard Nitzschke at Remsen where they made their home. She did the bookkeeping for Richard at Remsen Blacksmith and Welding which they owned and operated for nearly 50 years.  Richard died May 30, 2002.

Sally was a member of St. Mary’s Catholic Church and church guild, V.F.W. Auxiliary, St. Mary’s Mission Society, Plymouth County Elderly Peer Group.  She loved playing cards and was involved in many card clubs.  She was very active in the church.  She helped make the alter bread, embroidered baptismal gowns and Mission Towels.

Casket Bearers will be: Mike and Mark Anthony, Nick and Jon Lenox, Larry Feuerstenburg and Mike Majeres.
To order memorial trees or send flowers to the family in memory of Sally Mary Nitzschke, please visit our flower store.