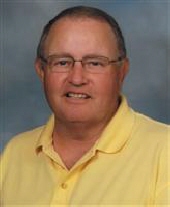 Funeral Service will be Saturday, Nov. 29, 2014 at 10:30 a.m. from Christ Lutheran Church LCMS in Remsen, with Pastor Dennis Martens officiating.  Burial will be in the Remsen Community Cemetery.  Graveside Military Honors will be conducted by V.F.W. Post 3328 and American Legion Post 220 of Remsen.  Visitation will be anytime after 5 p.m. Friday, Nov. 28, 2014.  There will be a prayer service at 7 p.m. all at Christ Lutheran Church LCMS in Remsen. Services have been entrusted to the Fisch Funeral Home & Monument of Remsen.

Vern was born Aug. 3, 1942 at Eldora, IA, the son of Millard & Esther (Purdy) Hathaway.  He was baptized and grew up in Whitten, IA.  He graduated from Union-Whitten High School in 1960.  He then attended Ellsworth Junior College in Ellsworth, IA.  Vern entered the Army National Guard on July 20, 1967 as a member of the 185th MP Co. and was honorably discharged March 19, 1973.

On June 29, 1968 he married Maureen “Midge” McDowell.  The couple lived in Marshalltown, IA for 11 years then moved to Durant, IA in 1979.  They then moved to Remsen in 1984.  Vern worked as a draftsman at Dunham Busch and Marshalltown Manufacturing in Marshalltown, IA and also Insurance companies American Mutual and Prudential.  In 1974 he started his employment with Harker’s Distribution Inc. working 38 years until his retirement.

Preceded by, his parents; one granddaughter, Hannah Fay Hathaway, one brother, Robert.
Casket Bearers will be Larry Swartz, Dan Kirkendall, Dennis and Paul Schorg, Dan Schreiner and Gary Trucke.
To order memorial trees or send flowers to the family in memory of Vernon R. Hathaway, please visit our flower store.